THE RAILWAY PHOTOGRAPHS OF


RECONNAISSANCE WITH A CAMERA

I have just received an email from Craig Oliphant, who writes…
'It is with great sadness that I relay the news of the death of the greatly respected railway photographer Ian S Carr, who passed away on 25th February 2015…I first met Ian at a Durham University Railway Society meeting in New Elvet, Durham. I was then about 15 years old and Ian was showing his photographs in the lecture hall, however the episcope (print projector) had broken down, so he laid out all the photographs across the hall and talked us through them individually. I admired one in particular of the diesel prototype 'Kestrel' crossing Durham viaduct. Unprompted he gave me the print to take home.
Over the next thirty years I saw Ian out and about with his camera and he always had time to talk with me. A quite reserved man in many ways, but a great inspiration. Without Ian's almost unique style of photography in which he captured every aspect of the 'day to day' railway scene, including many wonderful images of the early diesels types, we would have lost so much history of the period.
Thanks Ian and rest in peace…'

Craig's commemoration goes for all of us. During his lifetime Ian S Carr's contribution to our hobby has been immense; certainly he was one of the greatest photographers of his generation...his pictures have appeared in scores of books and magazines. I will never forget his generous assistance with photos for publication in a book and in the preparation for this website. Ian was a real gent to me...few men have made such an enormous impact.
He will be greatly missed

I have also been contacted by Richard Barber, Secretary of the Armstrong Railway Photographic Trust, a very admirable group established in 1987 following the death of well-known railway photographer, John William Armstrong, whose photographic archive dates back to the 1920s.

In 1987 the executors of the Armstrong estate approached the respected railway historian, photographer and author, Peter J Robinson, with a view to helping save this photographic collection for posterity.
Thankfully, Peter along with fellow rail enthusiasts Alan Thompson, Dave Tyreman, Eric Maxwell, John Midcalf and Ken Groundwater, managed to purchase this important archive with a view to saving it for future generations.

Since then the Trust has gone from strength to strength, acquiring a number of other photographic collections covering not only British Railways, but also buses, trams, ships, traction engines, planes and a selection of overseas photos, all of which is now available from the Trust for the benefit of historians, authors, publishers and educational purposes.

I am delighted to hear that Ian S Carr's photographic archive is now in the Trust's safe hands and any enquiries regarding Ian's photos can be made by clicking HERE to visiting the Trust's interesting website or by contacting the Trust's secretary, Richard Barber via email - richard.barber51a@yahoo.com - please note this is not a clickable link via Outlook Express - you will have to email manually.

Our interest in steam has its roots in childhood and is thus born out of nostalgia. The same can be   said of the early diesels: 'Westerns', 'Warships', 'Hymeks', 'Deltics', 'Whistlers', 'Hoovers', 'Claytons', 'Syphons', 'Peaks', 'Duffs' and 'Cromptons' chief amongst them. At first they were openly disliked by steam fans until we realised that they too had identities, and many examples have now been preserved as part of this nation's industrial heritage.
This brings me to the fabulous railway photographs of Ian S Carr, because if I had to single out the cameraman who influenced my interest in diesels the most, then Mr Carr is my first choice. His photographs of railways in the north of England are well known by enthusiasts, not only because of the high quality of his work, but because he recorded even the most obscure branch lines, including several colliery workings now long since gone.

(Above) Mention of the transition from steam is still liable to evoke strong emotions from a faithful band of enthusiasts, who remain unconvinced that steam had outlived its usefulness. At the time, BR was accused of placing too much emphasis on the procurement of diesels, and too little attention on providing adequate maintenance facilities - not surprisingly a high incidence of diesel breakdowns occurred, and when it did, steam was usually called upon to save the day - a point immediately seized upon by the die-hards of the steam faith. In this view, 'Britannia' class No 70027 Rising Star (devoid of both number and name plates) waits at Carlisle to assist ailing EE Co Type 4 No D341 on the 'up' 'Royal Scot' on April 4th 1966. A defect had been reported on the diesel approaching Carlisle, but in the event the fault was rectified and the EE Co Type 4 continued its journey unaided, albeit some 20 minutes late.

(Below) This is a typical three-quarter lineside view adopted by the mainstream steam railway photographer, yet Ian S Carr proves that with careful planning and a creative eye, photographs of diesel can still pack a mighty punch. With the absence of a smoke effect (an integral part of steam photography) composing shots of diesels requires a different technique since a picture of a diesel on its own is nowhere near as interesting. Here Deltic class D9005 The Prince of Wales's Own Regiment of Yorkshire - a regimental name not previously carried by a locomotive - arrives at Sunderland  with the diverted 13.30 Newcastle-Kings Cross on Sunday, ist May 1966. At the time, the northern end of Sunderland station has been completely demolished and the area cleared as far as High Street West to allow for the integration of the station with redevelopment of the town centre. The whole station was decked over and developed at street level which has subsequently created a subterranean (tube-like) atmosphere at platform level. 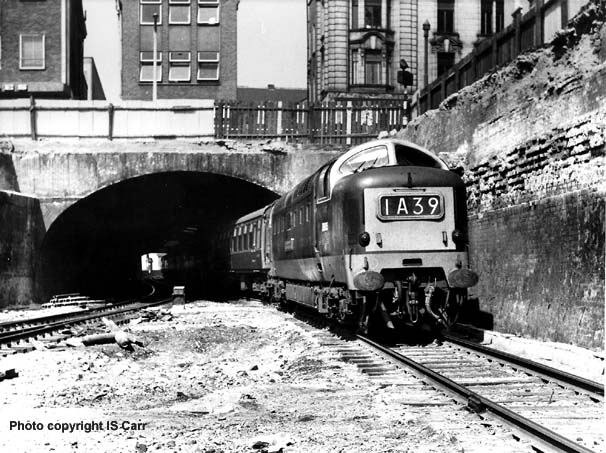 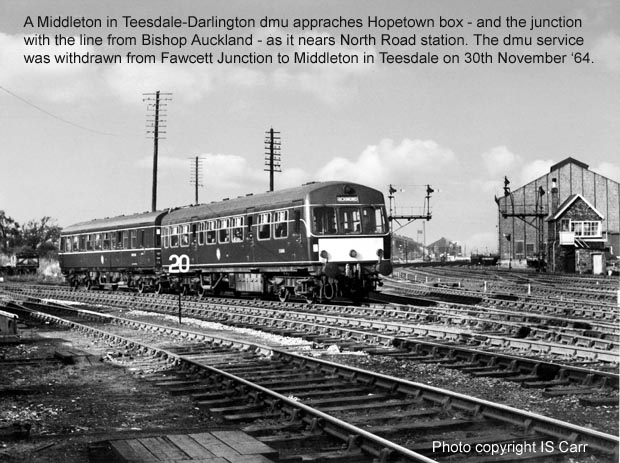 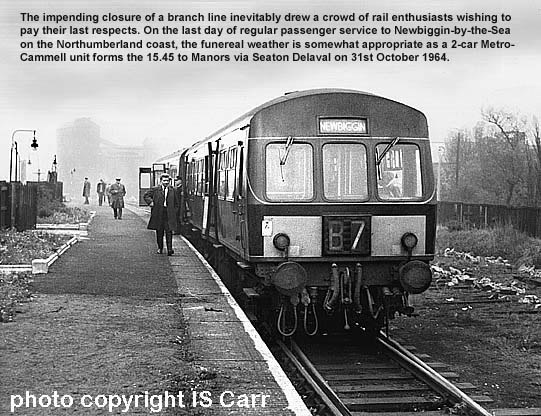 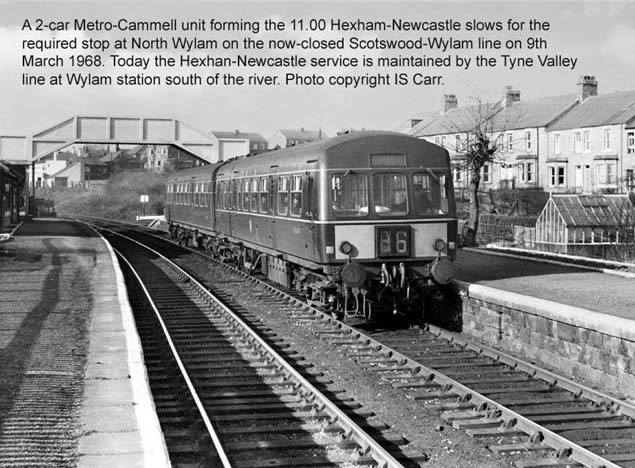 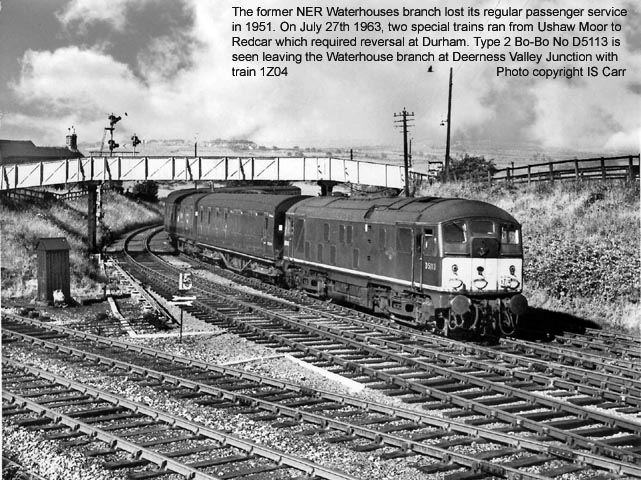 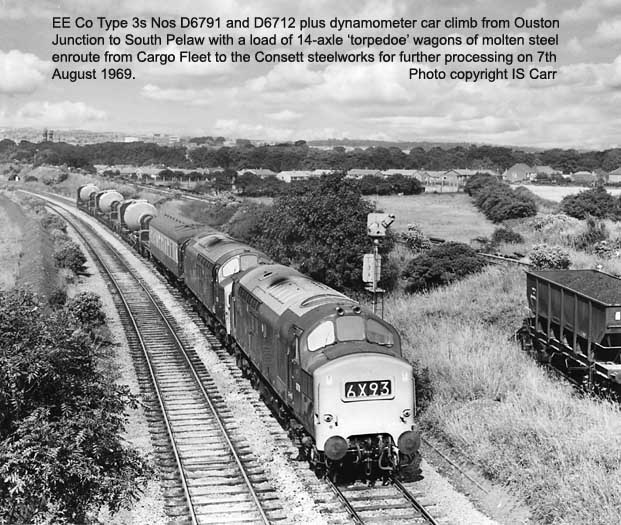 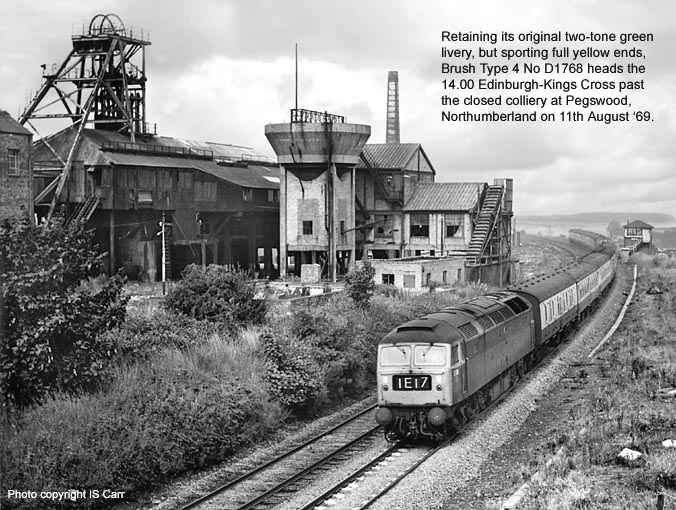 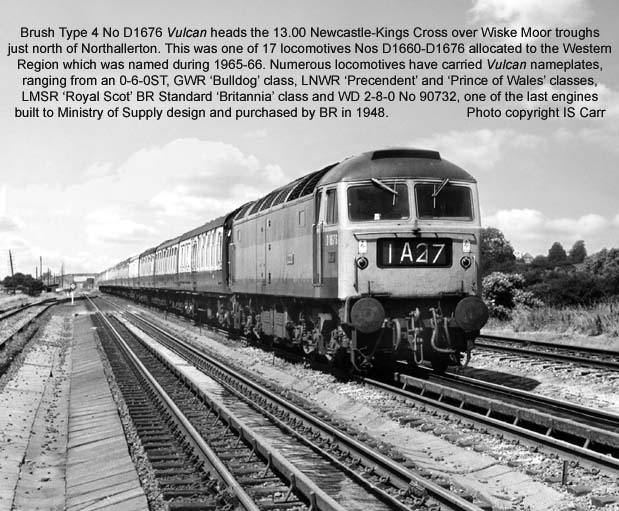 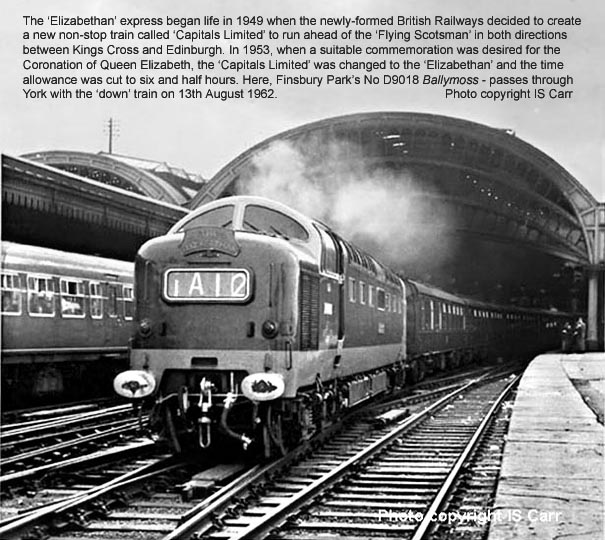