(Right-Below) I have been fortunate in obtaining a large number of photos taken by Southern Region railwayman Alex (Mac) McClymont for inclusion on this page. I first met Mac when I was a young 16 year-old fireman and he made a big impression on me. Once Mac passed for driving duties, it was a pleasure to be booked as his fireman. Mac is very knowledgeable about railways - and, surprisingly (for a SR engineman) his favourite loco class is the Gresley A4s, hence the reason I include this shot of him in the cab of 60024 Kingfisher at Basingstoke shed (70D). Indeed Mac has taken some wonderful photographs of classic Eastern Region steam at Kings Cross station and Top Shed during the early 1960s, and I can think of no better way of starting his 'Rail Cameraman' page than with this truly iconic photograph of Kings Cross station in its heyday. The shot was taken on 15th June 1962 with A3 Class 60062 'Minoru' in the foreground and an unidentified EE Co Deltic class bearing the WTT number 1A21 (09.55am from Newcastle) which has arrived on the next platform. Framed beneath the archway, an unidentified A3 awaits release and a porter pushing a barrow looks  across at Mac just as the camera shutter is released. Whether by luck or judgement, Mac has somehow managed to capture a classic moment in time on celluloid...

(Above-Below) A trio of Class 'A' Pacifics at Kings Cross on 15th June 1962; in the background is Class A1 No 60132 'Marmion', a name relating to the works of Sir Walter Scott, and Class A3 60059 Tracery, while in the foreground is Class A4 Pacific 60008 'Dwight D Eisenhower'. On entering traffic in 1937 this loco was originally named 'Golden Shuttle', but in 1945 the loco was renamed Dwight D Eisenhower in recognition of his service as Supreme Commander of the Allied forces during World War 2; Eisenhower later became the 34th President of the United States 1953-1961). No 60010 is now on display at the National Railroad Museum in Green Bay, Wisconsin, USA and recent efforts to repatriate the locomotive back to the UK have been unsuccessful. The 'squaddies' exiting the station platform look as though they are about to go on some well-earned leave. (Below) Another shot of A4 Pacific 60008 resting after her long haul from Edinburgh. An advertisement hoarding above the ticket barrier pronounces the benefits of the Yorkshire coastal resort of Scarborough - 'it has everything for everyone... 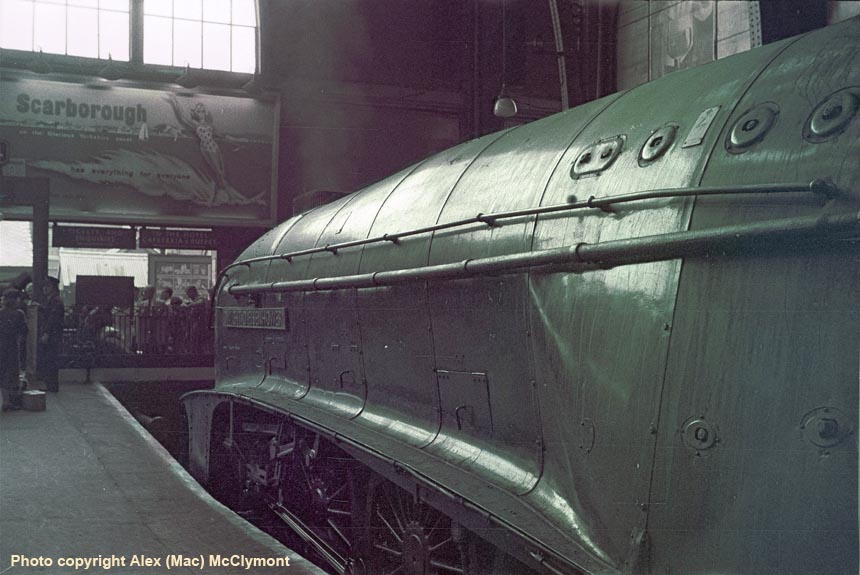 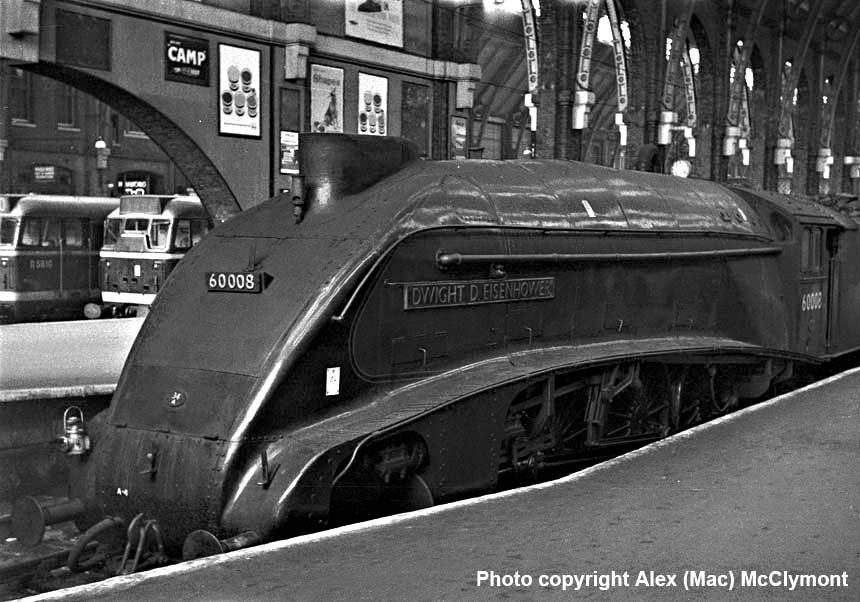 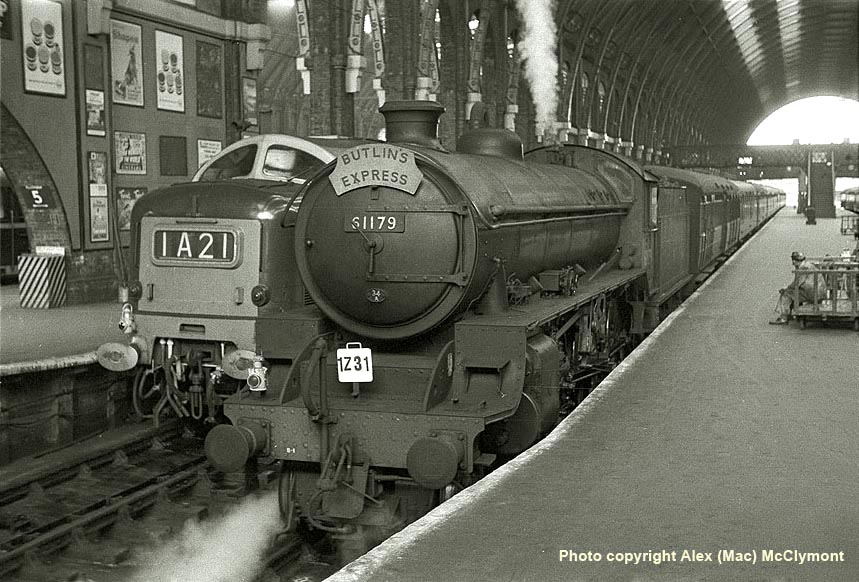 (Above-Below) B1 Class 61179 (sporting a Kings Cross 34A shedplate) simmers gently at Kings Cross station after working the 12.05pm 'Butlin's Express' from Butlin's Holiday Camp in Skegness on 15th June 1962.The Driver sits on a mail barrow waiting for the locomotive to be released for disposal duties at Top Shed;similarly an unidentified Deltic with the WTT number 1A21 waits to be released from platform 5 after working the 09.55am from Newcastle. (Below) A1 Class 60119 'Patrick Stirling' has just arrived at Kings Cross from Leeds. Like her numerical predecessor, 60118 'Archibald Sturrock', 60119 was named to commemorate an eminent GNR locomotive superintendent whose tenure at Doncaster was three decades (1866 to 1895). Perhaps Patrick Stirling is best remembered for his 'Single' which is considered the epitome of nineteenth century elegance combined with power; looking at the elegant lines of the Peppercorn Class A1s we have a twentieth century version of those same qualities. 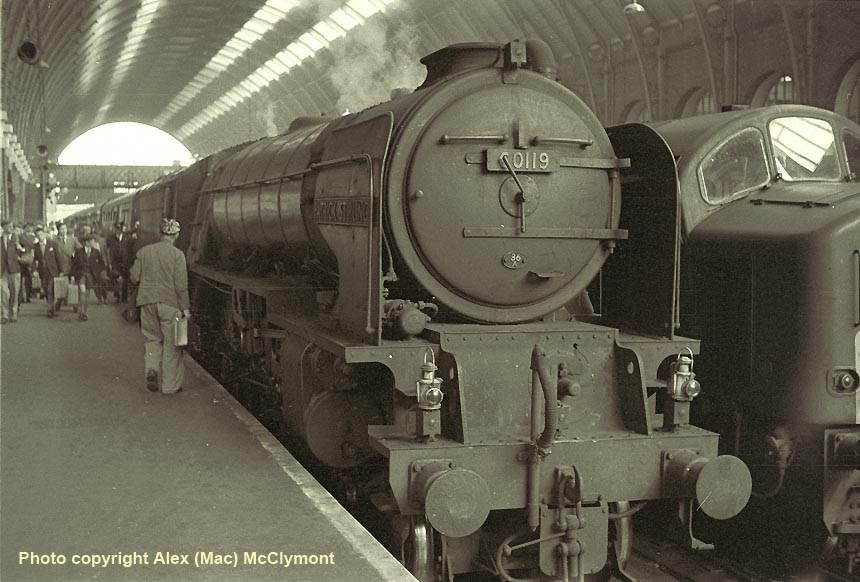 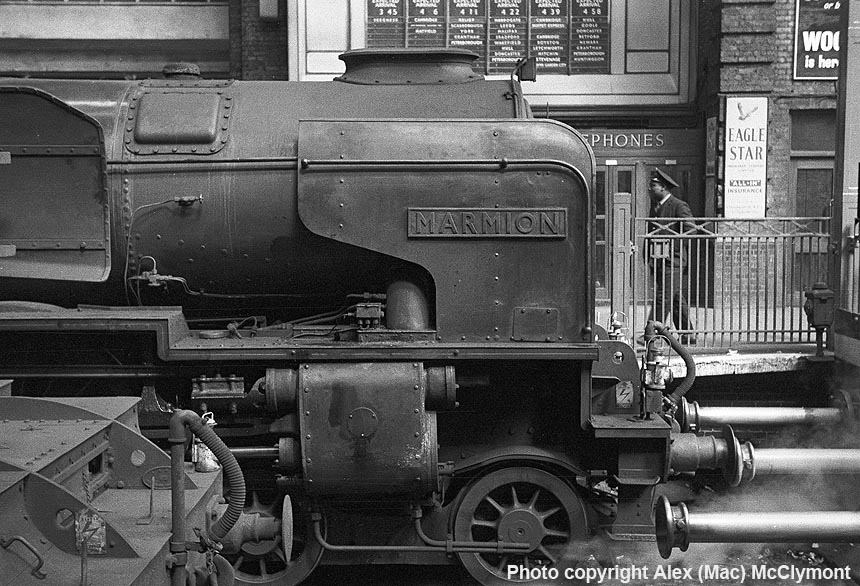 (Above-Below) Class A1 60132 'Marmion' waits on the blocks to be released at Kings Cross; it's late afternoon on 15th June 1962 and the Information Board displays the pending arrival of the 3.45pm from Skegness, 4.6pm from Cambridge, 4.11pm Relief, 4.22pm from Harrogate, 4.39pm from Cambridge (Cambridge Buffet Express) and finally the 4.58pm arrival from Hull. Built at Doncaster works in 1945, No 60132 was withdrawn from service in June 1965 and no A1 Class locomotives were preserved. However, we do now have a newly-built A1 60163 'Tornado'. (Below) Two boys look on in wonder at the motion of A3 Class 60059 'Tracery' as she rests at Kings Cross station awaiting the release of her train.in June 1962. The locomotive was condemned at Doncaster later that year and was scrapped in June 1963. On the right, Brush Type 2 D5672 also waits to be released from the adjacent platform.

(Above-Below) Two fine shots of A3 Class 60110 'Robert the Devil' as she leaves Kings Cross station on 15th June 1962. Quite a number of A3 and A1 Pacific locomotives were named after famous racehorses and 'Robert the Devil' won the St Leger in 1880. The first A3 was withdrawn in 1959, and by the early Sixties the Deltic fleet began to replace the A3s on the East Coast Main Line. The A3s moved to other duties, most notably the expresses to Scotland on the Midland Route out of Leeds. No 60052 'Prince Palatine' was the last A3 to be withdrawn in January 1966. All were scrapped except for 60103 - No 4472 'Flying Scotsman' - which was withdrawn in January 1963 and sold into preservation. 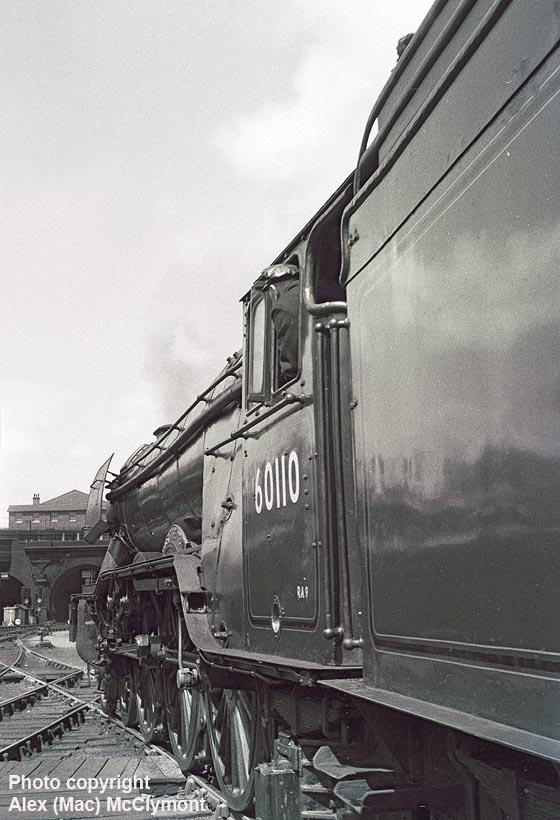 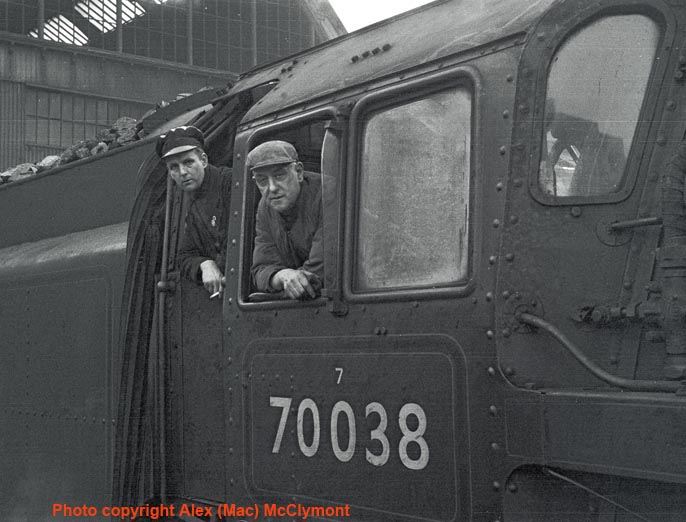 (Above-Below) Exhaust fumes billow from the diesel engines of Type 5 3,300hp English Electric Deltic D9005 as it awaits departure with the 5.35pm Kings Cross to Newcastle on 16th June 1962. The twenty-two locomotives in the class dominated express passenger services on the East Coast Main Line until 1978 when InterCity 125 'High Speed Trains' were introduced. 1978-81 saw the Deltic class gradually relegated to semi-fast or newspaper-parcel-sleeper services along the ECML (destinations including Cleethorpes, Harrogate, Hull, Scarborough and Aberdeen) plus occasional forays on the semi-fast service between York and Liverpool Lime Street and the Edinburgh - Carlisle via Newcastle stopping service. Withdrawal came at the end of 1981. Six locomotives were preserved and are still running today. (Below)'Brush' Type 2 D5653 and 'Deltic' D9005 at Kings Cross. The fuel point can be seen in the distance. 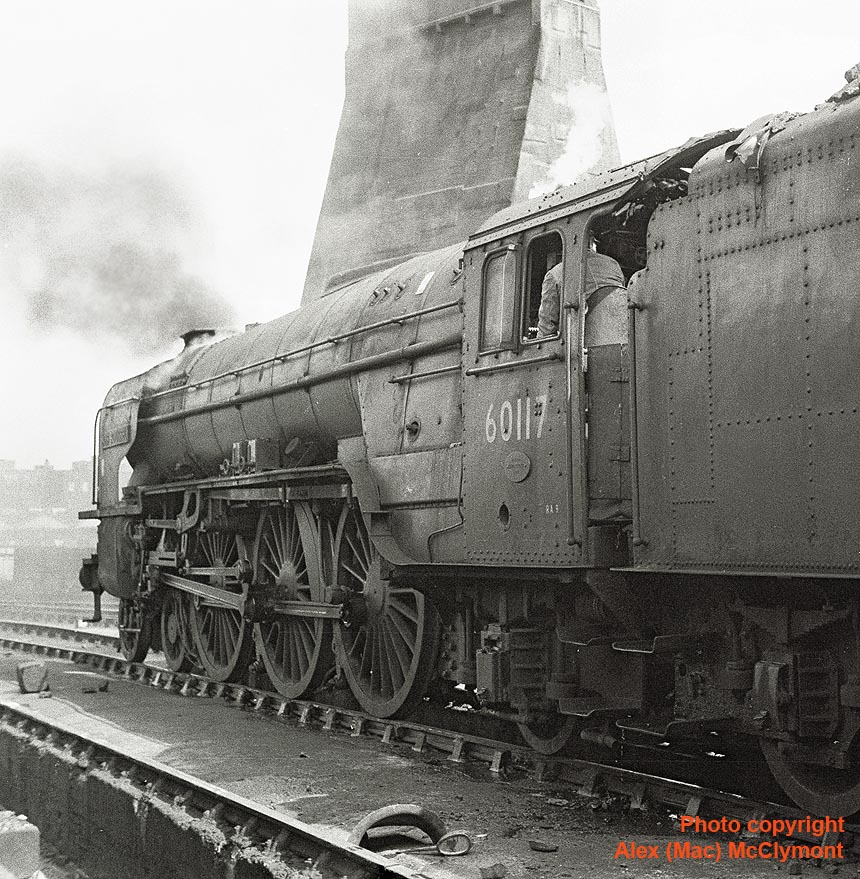 (Above-Below) Moving to Kings Cross Top Shed (34A) preparation is complete and A1 Class 60117 'Bois Roussel' exits the shed to run light to Kings Cross station to pick up her train. A discarded upturned oil feeder and firebox baffle plate lay in the foreground. Built at Doncaster Works in August 1948, she was the fourth of Arthur Peppercorn's A1s to be built and one of four class members allocated to Grantham on October 22nd.  Her original appearance featured a plain chimney, apple-green LNER-style livery with black and white lining plus BRITISH RAILWAYS in white on the tender. The first recorded sighting of 60117 in operation was on November 8th as light engine at Doncaster and twelve days later when hauling a train through Grantham. No 60117 was one of the ten longest-lasting A1s, but after almost sixteen years pounding the East Coast Main Line between Kings Cross and West Yorkshire, her last recorded working was the 6.03pm Leeds to Kings Cross on January 5th 1965. Doubtless there would have been a lot more life left in Bois Roussel had dieselisation not been rushed through so quickly. A racehorse by name and, with its named expresses a racehorse by nature! (Below) A4 Pacific 60017 'Silver Fox' at Kings Cross Top Shed in June 1962. While hauling the Silver Jubilee train on the descent of Stoke Bank in August 1936, 2512 Silver Fox achieved a maximum of 113 mph, then the highest speed ever attained in Britain with a passenger train in ordinary service. 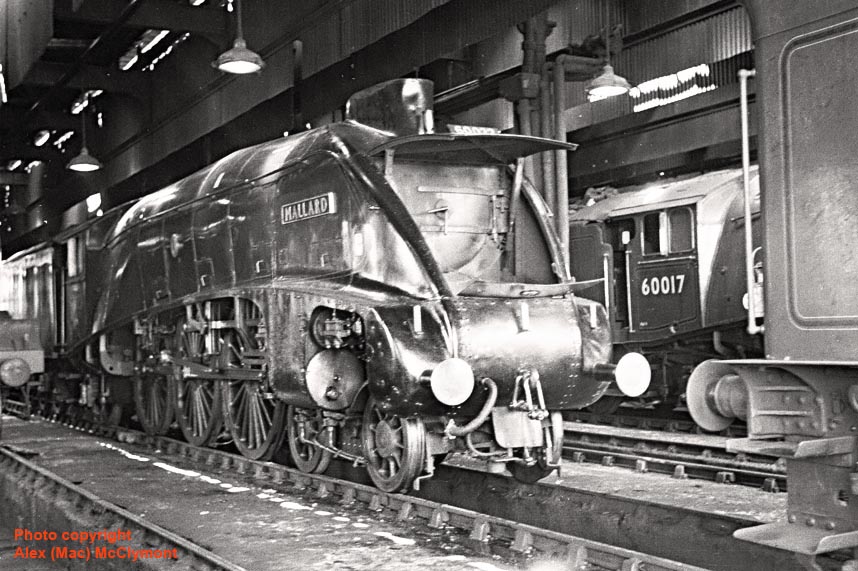 (Above-Below)Nicknamed 'Streaks' I couldn't help but marvel at their beautiful design when I first visited Kings Cross station as a 13 year-old spotter. It was love at first sight and I can still remember the first one I spotted there, No 60026 'Miles Beevor. However, the most famous A4 Pacific of them all, 60022 'Mallard', is shown here with her bevel-shaped smokebox front lifted at Kings Cross Top Shed in 1962. On 3 July 1938 No 4468 'Mallard' (the first of the class to enter service with the Kylchap exhaust) set a world speed record of 126 mph hauling six coaches and a dynamometer car. (Below) Also at King's Cross Top Shed on the same day is A4 Pacific 60021 'Wild Swan'. 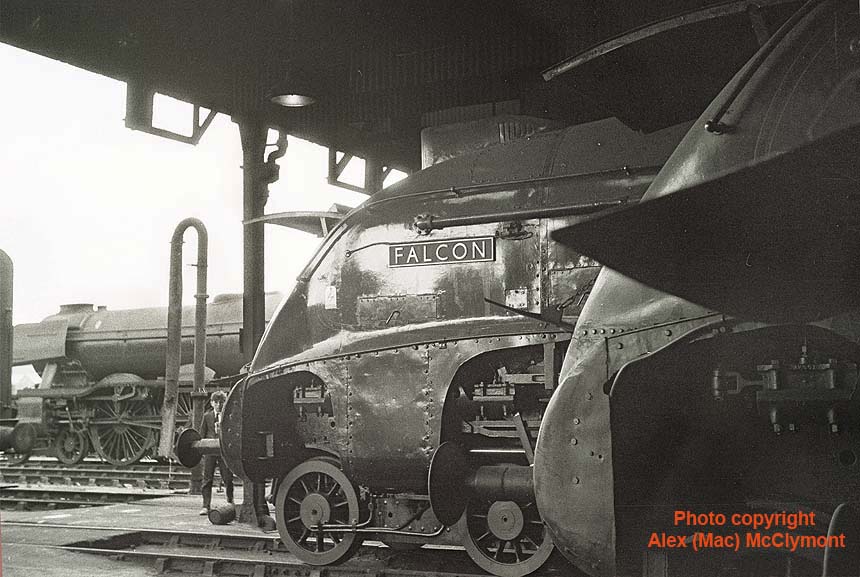 (Above-Below) A4 Class 'Falcon' dominates this photograph at Kings Cross Top Shed as a trainspotter steps unwittingly into the frame! In the foreground is an unidentified A4 Class and in the background, an unidentified A3 Class locomotive outside the shed. (Below) Taking his leave of Kings Cross Top Shed, Mac photographed an unidentified A3 class standing alongside A4 Pacific 60003 'Andrew K McCosh' on June 15th 1962. Originally named 'Osprey' she was renamed after the Chairman of the Locomotive Committee at that time. Unfortunately, she was one of the first four A4 Pacifics to be withdrawn along with 60014 Silver Link, 60028 Walter K. Whigham and 60030 Golden Fleece. 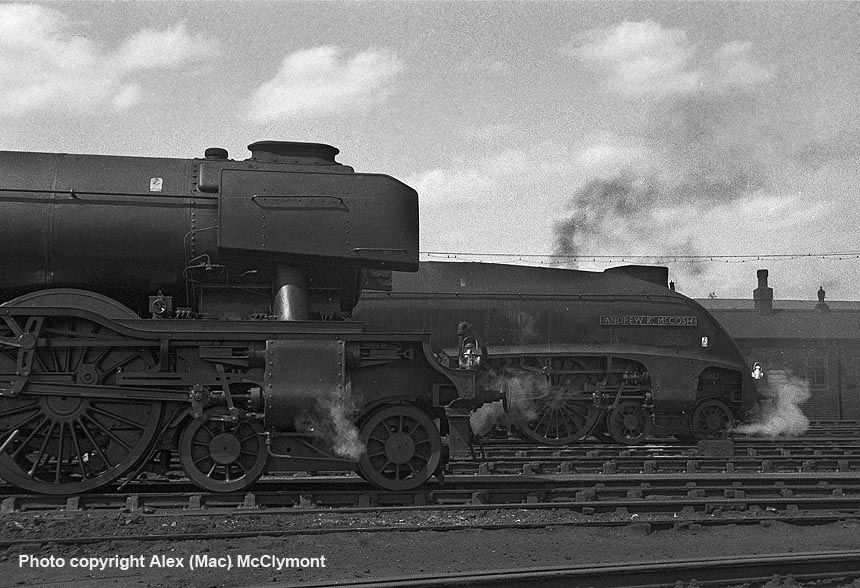 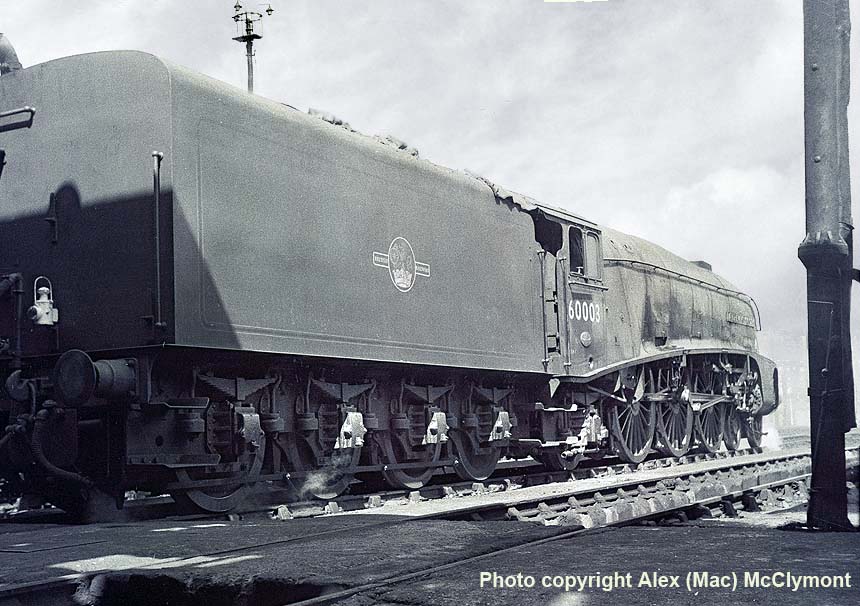 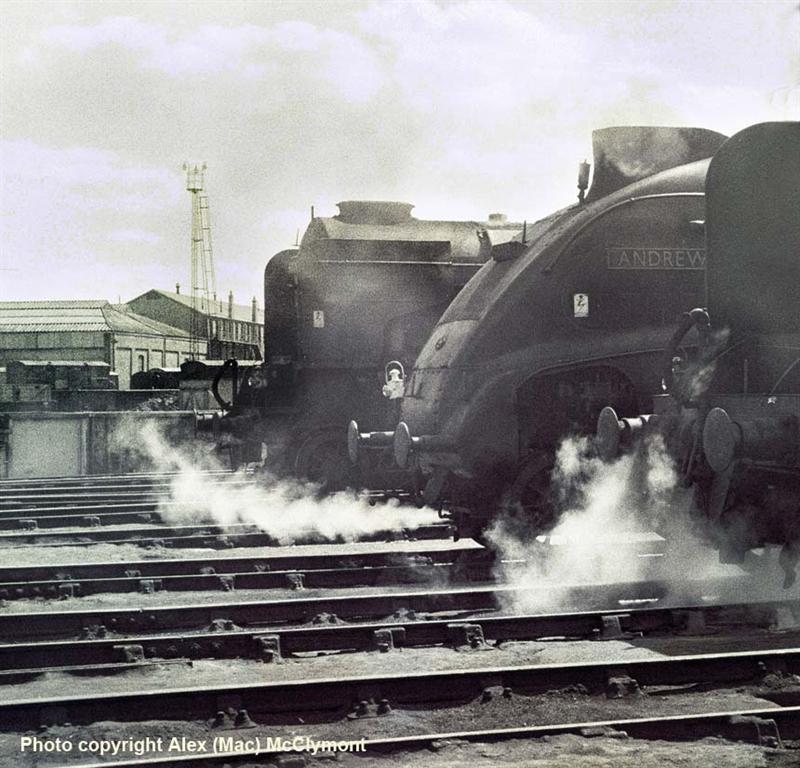 (Above) A fitting end to Mac's visit to 34A is this shot of him and his favourite loco class at Top Shed. 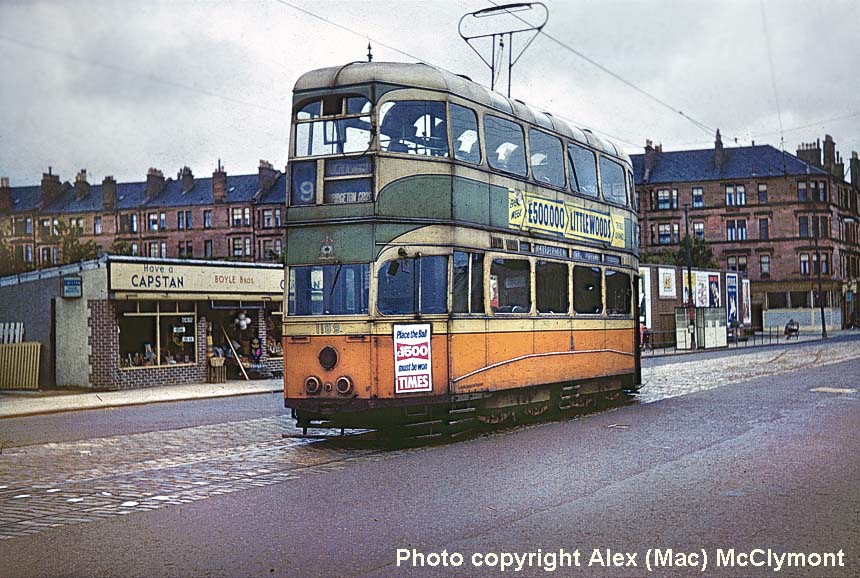 (Above-Below) By way of a change two shots of Glasgow trams...Mac stayed with his aunt in Rutherglen (Glasgow) in the last week of August 1962 before the Glasgow trams ceased to operate on September 1st 1962; he rode on two of the last routes. These shots were taken on Route 9 which ran from Dalmuir West to Auchenshuggle; the shot above with Boyle Bros shop is (he thinks) Dalmuir West Terminus and the other one he can't remember where it is...
Mac writes - 'Among my earliest childhood memories of Glasgow 1939-1947, is my brother and I looking out of the window from our second floor tenement block and trying and beat each other at bagging the Glasgow trams as they appeared at the busy junction of Norfolk Street and Bridge Street. There was a continuous stream of trams all day long, and I can still hear them clattering over the junction points and the whining of the motors as they passed by our flat.
Having left Glasgow in 1947 we moved to Brixton in London where trams were still running; we used to catch a No 34 tram (if I remember correctly) to Brockwell Park or Clapham Park with mum and dad; we also rode on trams that ran underground on the Kingsway Subway to a station in the middle. The Kingsway entrance is still extant today with big gates across the entrance; also the tramlines were never lifted and are still in situ…best wishes Mac...'

(Below) Two pages of BR Southern Enginemens' Memories feature a selection of Mac's SR photos. Click on links below...