A BRIEF HISTORY IN PICTURES

Since the English Electric Type 5 Co-Co fleet's reign ended on the ECML 30 years ago, modern day enthusiasts might wonder why the Class 55s commanded such adulation from rail enthusiasts? In order to find out the answer to that we must go back to the Fifties when the Modernisation Plan was announced, the emphasis being to replace BR's ageing steam fleet. British Railways was in dire need of investment to shake off years of post-war stringencies, but because of a lack of long-term plans by central Government, the proposed electrification of the ECML was mired in penny-pinching bureaucracy. Meanwhile, the LMR got the go ahead for upgrading the WCML from Euston to Liverpool and Manchester, but there was little the Eastern Region could shout about that caught the public's imagination. The golden age of the LNER had long since gone and all throughout the 1950s the pinnacle of the Anglo-Scottish expresses remained firmly rooted in the exploits of the Gresley Class A4 Pacifics during the immediate pre-war years 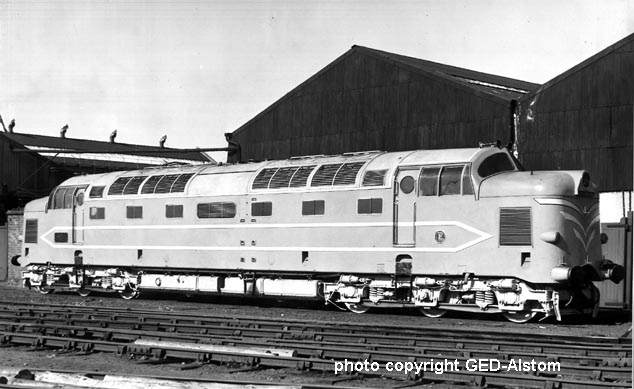 True, the Gresley A4s did put in some remarkable performances on the ECML, but by today's standards they were slow. The introduction of the EE Co Type 4s during the late Fifties didn't improve matters either, since there was little to choose between the tractive effort of a 2,000hp diesel and a good A4. What was needed was something more powerful - something capable of sustaining 100mph running. Then in 1955, like manna from heaven, along came the EE Co's prototype Deltic, a unique 3,300hp locomotive powered by two Napier motor gunboat engines. The locomotive made its debut on the WCML in December 1955, and at the time was the most powerful locomotive then in existence. It was also extremely light, weighing a mere 106 tons, mounted on a Co-Co wheel arangement which allowed for 100mph running without causing wear and tear on track like the cumbersome 1Co-Co1 machines before it.

As for looks? The EE Co clearly had export potential in mind for the distinctive American-style nose end and non-functional headlight were a prominent feature. So too was the Nankin blue livery, straw lining and speed whiskers - and, of course, there was the sweet sound of its engines. Cynics might argue that the rosy picture that's been painted of the Deltic fan's idyll is pure hokum - well, sorry to disappoint anyone; judging by the huge following the Deltic fleet commanded, countless thousands of fans wouldn't have missed it for all the world. 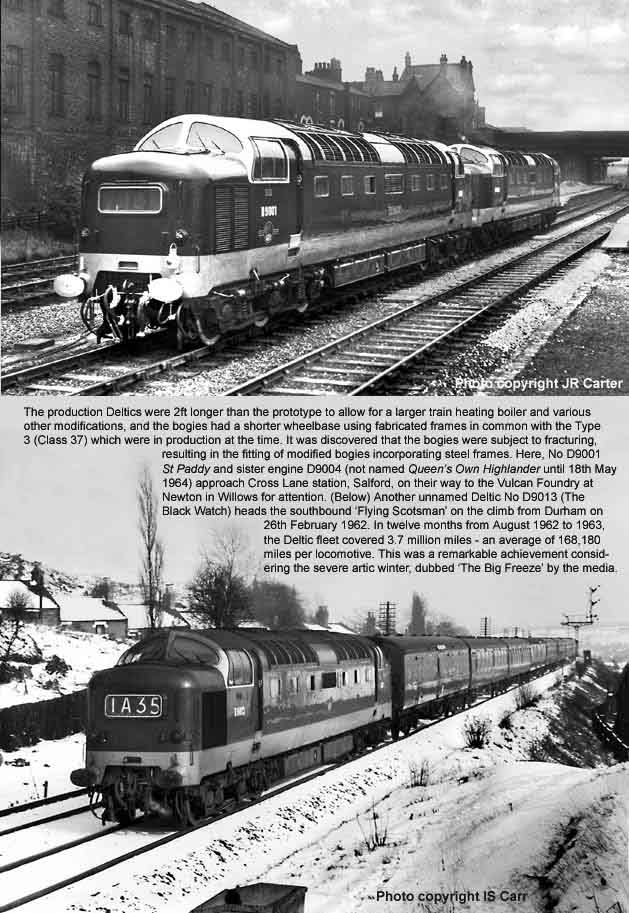 (Above) Ian S Carr is widely regarded as one of the elite among railway photographers and I couldn't resist using his shot of EE Co Deltic No D9009 Alycidon heading the 'up' 'Flying Scotsman' on the climb from Durham on August 8th 1961 - it packs all the power of a 'Deltic' at full cry. No D9009 entered traffic less than three weeks earlier on July 21st, joining sister engines Nos D9001/3/7 at Finsbury Park. The depot's full allocation was made up of eight 'Deltics', with D9012/15/18/20 following in quick succession. For the record, Alycidon won the Goodwood Cup in 1949, and sired the famous Meld - No D9003 in the 'Deltic' fleet. In the days before top lamp irons were fitted to the nose end, named-train headboards were mounted on a bracket that slipped into two front-end slots below the headcode display panel. Note also the standard locomotive headlamp code - two lamps above the bufferbeam - symbolizing an express passenger train, a legacy of steam days.

(Below) By September 1961 thirteen Deltics were available, and at the beginning of the winter schedules the Class A4s were displaced from the premier ECML expresses and more frequently to be found on Kings Cross-West Riding duties. It was the beginning of the end of the A4's reign, for the Deltic fleet took charge of numerous Anglo-Scottish expresses. The rosters were mainly undertaken by the Haymarket allocation, which included the up morning 'Talisman' and down 'Aberdonian' - the up 'Flying Scotsman' and 10.15 from Kings Cross - the up 'Heart of Midlothian' and 11.35 return from Kings Cross - the 11.15 from Edinburgh and the 'down' Flying Scotsman'. Another famous ECML express, 'The Elizabethan' began life in 1949 when it was decided to create a new non-stop train between the capitals - aptly named 'Capitals Limited' - to run ahead of the 'Flying Scotsman' in both directions. In 1953, when a suitable commemoration was desired for the Coronation of Queen Elizabeth, the 'Capitals Limited' was changed to the 'Elizabethan' and the time allowance was cut to 6½ hours bringing the express to within the charmed circle of mile-a-minute running. Engine crews changed by means of the corridor tenders fitted to the Gresley Class A4 streamlined Pacifics, but the non-stop record was discontinued at the commencement of the Deltics reign when a Newcastle stop was introduced for changing crews. Spotters dutifully note down the number of D9018 Ballymos at York. 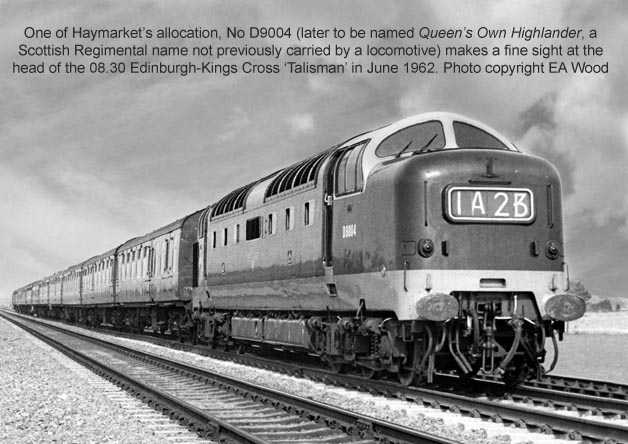 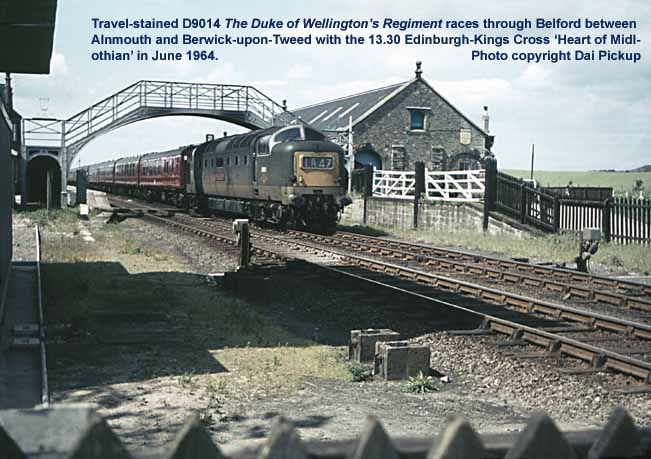 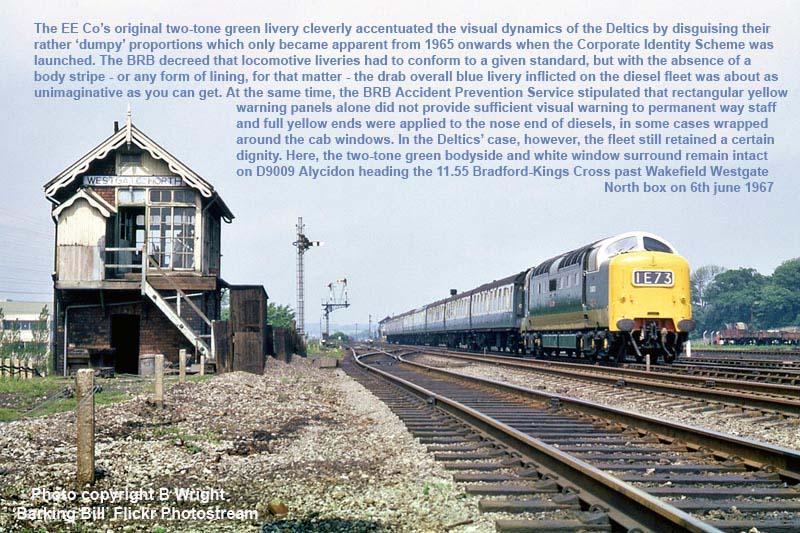 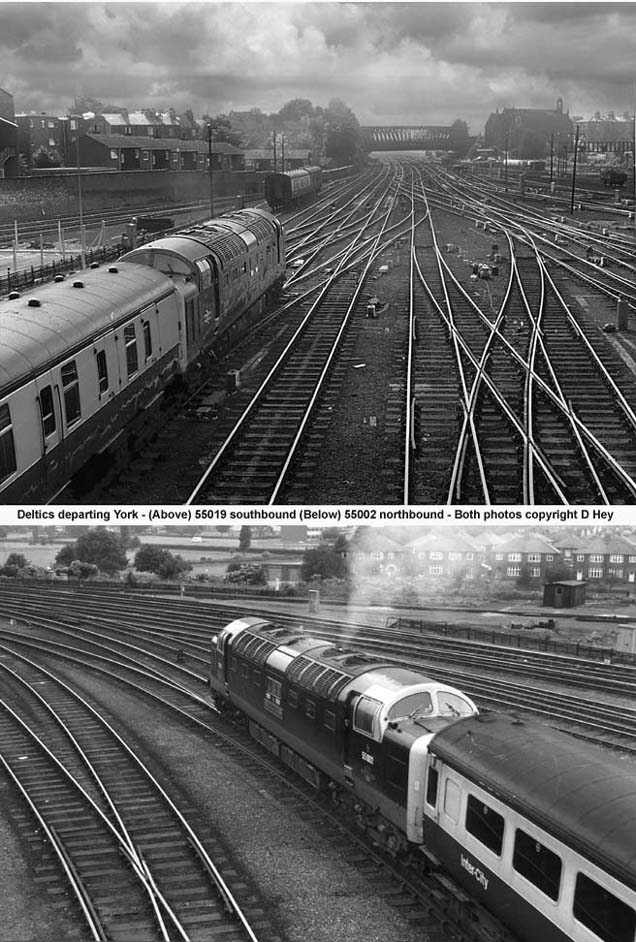 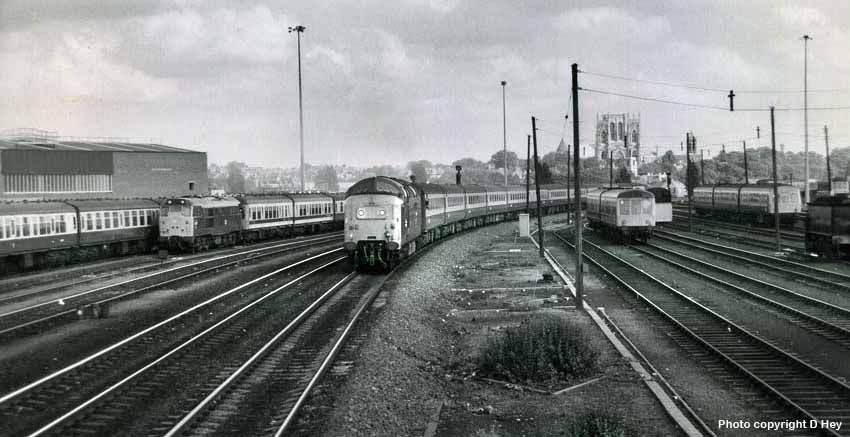 Throughout the Sixties, the renewal of trackwork and signalling on the East Coast Main Line continued at a steady pace, with many speed restrictions engineered out of existence, others eased at the very least. By the Seventies, the Deltic fleet really came into its own. Average speeds steadily climbed - the journey time to and from London was reduced to two and half hours from Leeds, three and half from Newcastle and five and half from Edinburgh. Coaching stock steadily improved too - the majority of trains being formed of Mk2 air-conditioned sets. By the end of the Seventies, the Eastern Region continued to be denied ECML electrification, but salvation came with the introduction of 125mph HSTs composed of eight Mk3 coaches sandwiched between two 2,250hp power cars. In March 1978, the first HST departed from Kings Cross with the 08.00 to Edinburgh - it was the beginning of the end of the Deltics' reign.

There are few smells more rewarding than that of a steam engine, it is one the most delicious in the world. If you can imagine soaking up the freshness of newly-mown grass or the radiance in the street following a good bucketing down of rain, then you'll appreciate the aroma of hot oil and coal that permeates every fibre of your anorak. It lingers there until the next time you wear it, like a genetic reminder of all the good times you've had...and promising a lot more ahead besides. As for the smell of diesels? It could be the hallucinating effects produced by inhaling too many diesel fumes that caused such adulation for the fleet of 22 locos. It reached epidemic proportions when the Detics' reign was reaching its ended on the ECML. For fans of the Rail Blue era...you'll find plenty of Deltic shots in full colour on Trevor Ermel's superb 'Rail Cameraman' page 70...here. 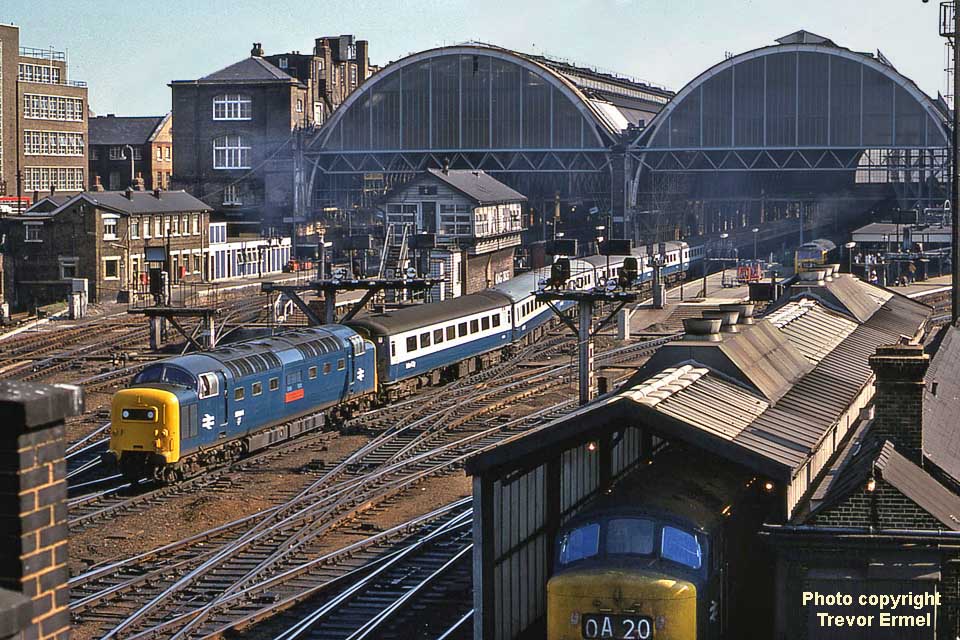 These are just two of the pictures featuring Deltics on Trevor's page - a journey from Kings Cross to Berwick-upon-Tweed in the 1970s (Above) Setting out for Edinburgh past the old Kings Cross signal box (which was demolished the following year) is 55014 The Duke of Wellington's Regiment on 3rd August 1975. Photographed from a road above Gasworks Tunnel this picture also shows part of the loco stabling and refueling point on the right, with a 'Peak' just visible. (Below) Passing under the North London line and climbing towards Copenhagen Tunnel, shortly after leaving Kings Cross, is 55021 Argyll and Sutherland Highlander with the down 'Flying Scotsman' on 1st August 1975. Trevor had recently seen the film 'The Ladykillers' and was trying to find the spot above the tunnel where the old lady's house had stood, not realising that it had been an elaborate 'prop' in the film!

Diesel fans have been addicted to the intoxicating waste spewed out by the EE Co's twin Napier engines for twenty-odd years...one whiff of the stuff compelled enthusiasts to chase them to their final resting place on Saturday, February 27th 1982, when no fewer that nineteen machines were herded together for a restricted 'Farewell to the Deltic' open day at Doncaster Works. The event was organised by BREL employees with proceeds going to charity. Three 'Deltics' had their engines operational - No 55002 on loan from the NRM, and the Deltic Preservation Society's future purchases Nos 55009 and 55019, both machines being prepared for restoration on the North Yorkshire Moors Railway.

Polite notice: All text and photographs are protected by copyright and reproduction is prohibited without the prior consent of the © owners. If you wish to discuss using the contents of this page the email address is below. Please note - this is not a 'clickable mail-to link via Outlook Express:
dheycollection@ntlworld.com